Homeowners have a huge variety of shower taps to choose from which are available based on their requirements and budget, so it would be good if they are aware of these showers’ features. Also, when issues arise after a shower tap installation, they will need information about the shower tap to get it replaced or repaired.

While most people use their shower regularly, they are usually unaware of the technical specifications of the shower faucet. Here is a guide to help you identify which type of shower is installed in your bathroom.

When the shower is delivered, the packaging will usually have detailed information about the manufacturer. If the packaging is discarded, users will have to use other methods to identify the brand. Manufacturers often engrave, emboss, etch, or print company information on shower faucets. In some cases, only the logo may be embossed on the shower. Some of the popular shower brands are Kolher, Moen, Grohe,Danco, Danze,Toto Delta and Gerber. 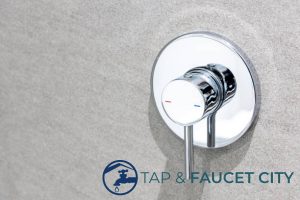 The shower will also differ in the number of handles. Some showers do not have any handles, but instead offer a control panel with buttons or other input options to allow the user to control the flow of water.

Most showers like the Grohe Eurodisc Cosmopolitan Shower Mixer Tap have a single handle that controls the pressure and temperature of the water supply. Some showers have two handles, one of which controls the supply of cold water and another that regulates the flow of hot water. There are also showerheads that have three handles: one for hot water, a second for cold water, and a third handle to divert water between the shower head and tub as needed. 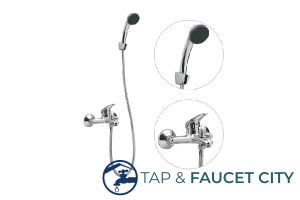 In a conventional shower set, the shower head is fixed on the ceiling or to the wall using a pipe which means the position of the shower head cannot be easily changed. However, more and more people, especially the elderly, children, and women want more control over the water flow.

As a result, hand showers like the Fidelis shower set FSS-56305 are becoming more and more popular. With these showers, a flexible hose is used to connect the water supply to the shower head, the position of which can be easily adjusted according to the user’s requirements. 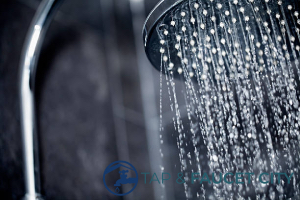 One thing to consider when purchasing a shower tap is its flow rate. Typically, water will flow out of the shower at a constant rate based on pressure and temperature settings.

In some showers however, the water pressure will be different because it is a pulsating or massaging shower. The size of the water droplets is usually larger, and the pressure of the rain will be smaller. Therefore, based on the water flow pattern, it is often easy to identify the type of shower if service is required.

Homeowners have to choose from the different types of showers available in the market that match their preferences and budget as stipulated in most guides for choosing the right shower tap. Most of them are using their shower regularly but still usually do not know the technical specifications of the shower tap.

In order to help users identify the type of shower faucet installed they have to know some information about their shower taps like the shower tap manufacturer, number of handles, type of connection, and shower’s water flow rate. Knowing those can be a big help whenever going for a shower tap replacement.

Looking for End-to-End Tap Services? Whatsapp Us for Help! WhatsApp to Start Now! The bathroom tap is probably the most important plumbing fixture...

7 Points to Note When Choosing A Two Way Tap

Looking for End-to-End Tap Services? Whatsapp Us for Help! WhatsApp to Start Now! Like most people, perhaps you do not give your tap fair...

Looking for End-to-End Tap Services? Whatsapp Us for Help! WhatsApp to Start Now! Proper faucet or tap installation is often overlooked as part of...

Signs Your Taps Need To Be Replaced

Pros and Cons of Installing a Rain Shower Set

What You Should Look Out For While Buying Mixer Taps