In Need of  Tap Installation Services? Whatsapp Us for Help! WhatsApp to Start Now!

You noticed that your old shower is not functioning properly anymore and now you are opting to invest in a new shower set. There are a lot of options in the market but the one that is gaining popularity in Singapore is the shower mixer tap. If you plan to invest in one and you want to know all about it, then continue reading and discover all you need to know.

A mixer shower tap is basically a shower connecting to hot and cold water in your house. The cold and hot water gets combined in a valve before it is sent to the showerhead with a stronger flow compared to electric showers but it will all still depend on your water system’s pressure. Through this, you can control the water temperature and its flow by adjusting the bath taps or through the shower’s valve. 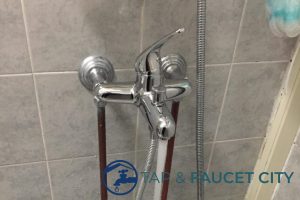 This type of shower has only one lever that you can move up and down to control the water flow, like the Fidelis One-Way Shower Mixer Tap FT-8203. If you move the lever from side to side you will be able to control the water temperature. There are also two types to choose from this type of shower tap – concealed showers wherein the plumbing fixtures will remain hidden behind the wall and only the shower lever valve remains outside. The next option is the exposed shower where the shower valve and plumbing sit exposed on the wall. 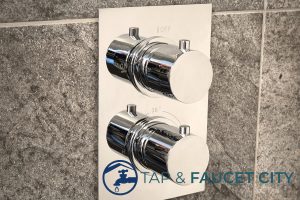 This next kind of shower set comes with two controls – one operates the temperature and the other operates the flow. In concentric models, you can leave the temperature at your decided setting and use it that way the next time you take a shower. In certain water tap models, flow controls are replaced with diverter valves to let you switch the water flow between a showerhead and bath filler, or between two different showerheads. 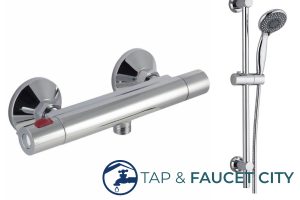 This one comes with two controls too, but both of them are present on one bar like the Grohe Essence Shower Mixer Tap. One control is for the water temperature and the other is for the flow. Instead of these flow controls, they may even come with diverter valves that let you switch the water between your overflow shower head and a completely separate shower handset.

The cost of a shower tap replacement or installation is dependent on the following factors.

Quality of the Tap

Looking at its quality, size, function, design, and materials can guide you in choosing the right shower tap. The total cost of your shower mixer set largely depends on those factors. If you think you will save money by choosing a substandard shower faucet, you are wrong. A substandard faucet can quickly start to fail, and you will end up paying more by having to replace the shower tap. Therefore, it is wise to choose a quality faucet from the beginning and it is equally important to get your new shower set installed by a professional plumber with tap installation services.  They have the right skills and experience in installing faucets and shower sets in many homes in Singapore. They can help you choose the shower set that best suits your needs and install it properly and efficiently.

There are things to consider before installing a bathroom tap (e.g., a shower mixer tap) like knowing the taps that meet your aesthetic expectations. Apart from other factors that can affect the average cost, there are other factors that you must give importance to – the place of lodging, the distance it has from your water services plumbing division, and the complexity of the job.

If you are looking to buy a shower mixer set for your bathroom, it is important to know the different types of mixer showers so that you can select the right model for your home. It is recommended that you engage a professional plumber that provides an end-to-end solution where they can guide you in how to choose a faucet for your bathroom and provide installation services as well.

Looking for End-to-End Tap Services? Whatsapp Us for Help! WhatsApp to Start Now! Is your current bathroom tap rusted and ugly? Is your existing...

Looking for End-to-End Tap Services? Whatsapp Us for Help! WhatsApp to Start Now! It can be very inconvenient and costly to use toilet paper after...

Looking for End-to-End Tap Services? Whatsapp Us for Help! WhatsApp to Start Now! The kitchen sink tap is one of the most commonly used plumbing...