The kitchen sink tap is one of the most commonly used plumbing fixtures in the house as it is used for handwashing, fruit, vegetables, and drinking water. As with other fixtures, the duration that a tap can be used without any maintenance is largely dependent on the quality of the tap and tap installation. In the event of a major problem with a faucet, homeowners should consider installing a new faucet to save time, prevent water wastage, and avoid inconvenience. It is advisable to inspect the existing faucet carefully and take the decision to install a new faucet, especially when repairs are not possible or financially viable. Listed below are some common problems with faucets that require replacement.

Usually, water contains dissolved minerals, and in some areas where the concentration of dissolved minerals (e.g., calcium, lime) are high, it will result in hard water. Some of these minerals are deposited inside the tap on the spigot valves. While cleaning the storage tank, plumbing system, mud, and other debris also flows through the tap. All these deposits reduce the rate at which water will flow from the tap. While in rare cases, mineral deposits can be removed manually, minerals often react chemically or corrode the faucet. The mineral deposits are usually whitish in color and first form internally on the valves, gaskets. If the mineral deposits are externally visible, a tap replacement is recommended. 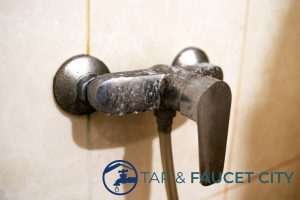 A one-way tap or any type of tap usually has a limited lifespan depending on its design. Some of the manufacturers will specify – for example, how long bathroom taps usually last if used under normal conditions. Typically, high-quality taps from the top brands are designed for use for at least 15 years. Therefore, if the tap is used extensively for more than a decade, it is advisable to replace the tap with the latest model. 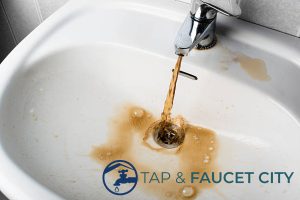 One of the most common faucet problems is rust. Since water is constantly flowing through the tap, one or more components of the tap are likely to get rusted over a period of time. The common types of taps have several metallic components like the flanges and spigot, which can chemically react with water. This can affect the performance of the tap. It will take more time for the water to flow, and the water may turn out to be brown due to the rust. Since rusty water is obviously a health hazard, tap replacement is highly advisable.

In cases like a leaking tap, the problem may be with its gaskets, filter, cartridge or other tap components. Though plumbers can replace these components to fix the leaking problem, sometimes the tap will still continue to leak after some time. The main reason why you should hire a plumbing professional to fix your leaking tap is the water wastage and the entire plumbing system that will be damaged if left unfixed due to the constant flow of water. Plus, the sound of a dripping tap is often annoying the homeowners. By Installing a high quality faucet, it can usually help to fix the problem for at least a decade.

Knowing when to have your tap replaced is necessary. For instance, you encountered a common tap problem and experienced it again after a repair, it may be a sign you need to replace your taps. When is a tap replacement necessary? Firstly, if there are visible mineral deposits that are usually whitish in color and form internally on the valves. If you are using a more than a decade-old tap, it might be time to change it with a much newer model. Another sign that you need a tap replacement is when you see rust on your tap – indicated by the flow of brown water from the tap. Lastly, water tap leaks cannot seem to be resolved by a tap repair. You might be wondering how much does it cost to install or replace water taps in Singapore? When you opt for a replacement, do consult a professional plumber so that they can provide you with the most accurate quote based on the complexity of the job.

Looking for End-to-End Tap Services? Whatsapp Us for Help! WhatsApp to Start Now! Since the bathroom tap is used frequently, most homeowners in...

Faucet Buying Guide The purchase of a tap and faucet are usually the last to be installed when arranging a bathroom or kitchen. This device...

Looking for End-to-End Tap Services? Whatsapp Us for Help! WhatsApp to Start Now! There are plenty of shower taps available in the market, and the...

3 Things to Consider Before Having a Rain Shower Set Installed